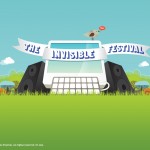 It seems appropriate to find out about a virtual festival through a friend on Facebook who I’ve never met. This lead to a shared experience with hundreds of other festival-goers who never get to meet each other.

The Invisible Festival is taking place over the weekend of 8/9 August 2009. The venue for the festival is wherever you want it to be. The soundtrack is the same but the venues are different. The very simple idea being that you invite all your friends to your place and you listen to a set playlist. This happens at many different venues but the experiene is shared on Twitter, Facebook and Flickr. Its all provided free but donations are requested for Cancer Research UK.

The music is provided by The Invisible Festival as playlists on Spotify. The event wouldn’t be happening without Spotify which as a service has to be seen to be believed. See Lifehacker Spotify article for glowing review. Spotify has 3.8 million tracks available for streaming, for free. Its like iTunes without the shopping cart.

Similarly, without the Invisible Festival I wouldn’t be a Spotify user. Its ridiculous but I just didn’t realise how great it was going to be even though people have been raving about it. And its a nice smug feeling that the UK is one of the first countries to get access to the service.

Spotify and Invisible Festival made the best festival of 2009!

This entry was posted in Causes, Twitter, Web. Bookmark the permalink.