Work is coming to a close on the prototype of MapFilter app. The main features are working. It has a clean UI without any animations. It is complete enough to gather feedback on the interest in its use. 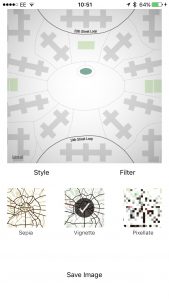 It has been written using the Beta versions of Xcode 8 using Swift 3. It is configured with a deployment target of iOS 10. So I had not used in on a device until this week. As its a simple interface there were no real surprises or glitches. The filters perform much faster on the device than in the simulator, as expected. The intermittent crash on UIImageWriteToSavedPhotosAlbum, has been resolved.

The next step will be to get a crash free version deployed to TestFlight. I’m using BuddyBuild for building and deployment. Even on the free tier, it does so much heavy lifting and handling of provisioning profiles that it’s a timesaver. I’ve also installed the BuddyBuild SDK for crash reporting and these are created as issues in Github.

I’m also trying the use of Slack for handling notifications from Github and BuddyBuild. This allows me to keep all my dev alerts in Slack and out of email. Some may call overkill, but they’d be wrong. As an indie dev, I need my workflow to be as tight as possible. My time is my money.

This entry was posted in Apps, Development, iOS, Maps and tagged devblog, tinyshinymaps. Bookmark the permalink.