After a relatively short amount of time, Twitseek is in Beta at http://beta.twitseek.com.

So, Twitseek. It’s like Google, only for Twitter. It’s an attempt to present the results from a Twitter search in a different format. It should have been called Twiggle or Twoogle but it just didn’t sound right!

The idea behind the site is very simple. I was starting to find that search.twitter.com was a better search engine to find really current links about really current events than Google. It was much better at highlighting URL’s that were being twittered than Google Blog Search or Google News depending on what you were looking for.

The frustrating part about search.twitter.com is that it would only show the TinyURL with the expand option. It then become impossible to simply scan the results to see which links were relevant. Twitseek aims to address this problem.

Twitseek only returns tweets that contain a link. People are normally tweeting a relevant URL. It then expands that URL by default to allow you to scan the results. It also returns the Page Title of the URL as URL’s don’t always make easy reading. This information is then presented in a the same way as Google search results are – Page Title, Tweet content, URL, Twitter Username.

Below is a screenshot of results for Stephen Fry which shows mixture of postings on various sites. 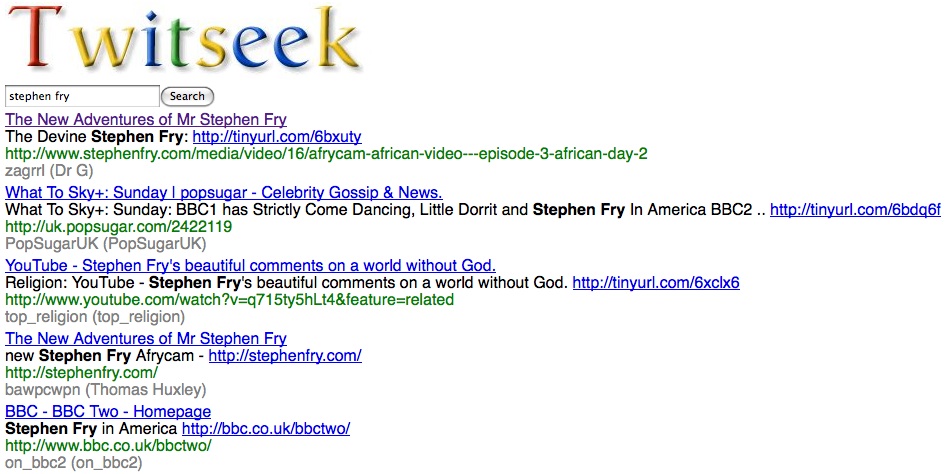 The same search criteria on search.twitter.com returns comments about Stephen Fry but gives me no links to anything he is currently doing.

The site is currently in Beta to get feedback before a final polish and roll out of more features. Follow Twitseek on Twitter for updates.

Case study presentation to document the process of replacing a static web site with a social network site from Ning.com.

Posted in Photography, Technology | Comments Off on Case Study: From web site to social network

The Duh! Guide to the iPhone 3G

While playing music on the iPod take the headphones out, it’s a loudspeaker. Duh. Now throw your speaker dock away!

When typing, double tap the spacebar to get a space followed by a period. Duh!

When typing, rely on the autocorrect do the work for you. youve becomes you’ve, ive becomes ive and ygr becomes the. Duh!

In Safari, press and hold the .com button to display a popup list of .edu, .org and .co.uk. Duh!

In Safari, press and hold on an image to display a menu to save the image to the camera roll. Duh!

Take a screenshot of your Home screen by pressing the Sleep/Wake button and the Home button at the same time. The screenshot is saved to your camera roll. Duh!

You can set multiple alarms and switch them on and off as required. Duh!

Even though Safari doesn’t use Flash you can view embedded YouTube videos because it’s clever enough to open them in the YouTube app. Duh!

This list was created from: http://www.apple.com/iphone/tips/ and should also apply to the iPod Touch.

Let me know of any useful tips that I’ve missed in the comments.

Initial use shows it to be clean and clutter free with a slight feeling of ‘my first browser’ about it.

As this release is only Version 0.2.149.27 there’s plenty more to come in future. It’s only available on XP, sign up for email updates on the Mac version.


Find more photos like this on ClinPhone Photography Club

Posted in Photography | Comments Off on Edale

Listening to MacBreak Weekly (ep. 101), they were discussing that there is no way to try before you buy on apps in iTunes AppStore. They seemed to skirt around the solution without actually saying it.

For those apps where try before you buy is an issue, a free or discounted version should be made available which demos the features, with a premium version at the ‘correct’ price. This is back to the old fashioned shareware model, or the modern model of freemium which is more typically applied to products and services.

This would be an ideal working model that allows a test drive on a trial basis with very little or no outlay. It is a model which is proven and accepted.

This model is also a great way for a developer to determine whether there is an audience for a product. By releasing a basic version of an app for free or low cost, the response to the app can then be judged to inform the decisions on the direction of the product. By soliciting feedback on feature requests, improvements, enhancements and third party integrations it is possible to build for the current userbase.

This allows a developer to test the market before making a huge commitment to a project that may not offer the required return.

For both developer and user, the AppStore could prove to be a win win situation.

Ryan Carson is the next charity head shaver after Kevin Rose. He’s hoping to raise a staggering £20,000, using a mix of promotion on Twitter and at FOWA. Donations accepted via his JustGiving page.

His chosen charity is AbilityNet:

AbilityNet helps over 165,000 people a year who thought they couldn’t use a computer because of a disability, overcome their problems. Computers open up the world of communication, learning and work; or simply shopping, emailing and having fun with friends and family across the world.

The shave off is Thursday August 14th and will be broadcast on uStream.

Posted in Causes | Comments Off on Shaving Private Ryan

I made the decision between iPod Touch and iPhone pretty simply. The interface looked great. Much sexier than anything before and very exciting. But I couldn’t get excited about the inclusion of a phone so opted for the iPod Touch.

When the iPhone 3G was announced it was a much easier decision to make. I had to have it. Still not for the phone functionality but for having an internet connected device in my pocket.

For the first time I’m getting play with some of the iPhone 2.0 features. Things like the Maps feature but how interesting can that be? Simple things like being able to set up directions and play them back step by step on as the Google Maps site. When combined with the current location it can show you exactly how lost you are.

The genius moment is when looking at the maps while driving and a little blue spot starts flashing on screen to show your location and then begins moving as you drive. Suddenly this a feature that I have needed all my life! The first time this happened in the Scottish countryside I saw none of the beautiful scenery as I was transfixed by a little flashing blue light.

Posted in iPhone | Comments Off on GeePerS

It’s probably my fault for using the iPhone, but it keeps running out of charge after about 5 hours. This is less than previously experienced with the iPod Touch or even iPod mini. Partway through the working day, the iPhone is giving battery warnings, which was never a problem for an iPod but definitely a problem for a mobile phone.

All I need to do is charge, right? Wrong. Using a USB connector hooked up the the PC is no good without iTunes installed. So surely using an iPod charger would be OK? It would be if I wasn’t using one that had been kicking around for while and wasn’t ‘compatible’ with the iPhone. Power, charger and iPhone not compatible, huh!?

When buying the iPhone I had no intention of using it just as a phone. What a waste that would be for a truly mobile pocket computer. It was the 3G network to allow easy web browsing and third party apps that appealed. I’m using Twitterific and even the Facebook app much more than that Phone app. And a healthy appetite for the consumption of podcasts ensure that a couple of hours of every charge are spent listening on the iPod.

While the power consumption continues to be unimpressive and the solution is long winded I’m already looking forward to the next generation that can pack more power for its punch.

Posted in iPhone | Comments Off on iPhone – Failing To Charge

Posted on August 8, 2008 by Martin
Posted in Photography | Comments Off on Nottingham Photo Safari